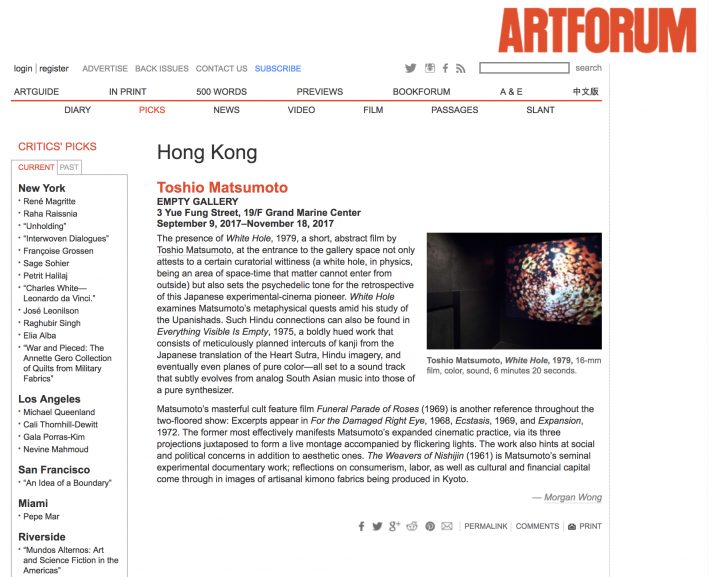 The presence of White Hole, 1979, a short, abstract film by Toshio Matsumoto, at the entrance to the gallery space not only attests to a certain curatorial wittiness (a white hole, in physics, being an area of space-time that matter cannot enter from outside) but also sets the psychedelic tone for the retrospective of this Japanese experimental-cinema pioneer. White Hole examines Matsumoto’s metaphysical quests amid his study of the Upanishads. Such Hindu connections can also be found in Everything Visible Is Empty, 1975, a boldly hued work that consists of meticulously planned intercuts of kanji from the Japanese translation of the Heart Sutra, Hindu imagery, and eventually even planes of pure color—all set to a sound track that subtly evolves from analog South Asian music into those of a pure synthesizer.

Matsumoto’s masterful cult feature film Funeral Parade of Roses (1969) is another reference throughout the two-floored show: Excerpts appear in For the Damaged Right Eye, 1968, Ecstasis, 1969, and Expansion, 1972. The former most effectively manifests Matsumoto’s expanded cinematic practice, via its three projections juxtaposed to form a live montage accompanied by flickering lights. The work also hints at social and political concerns in addition to aesthetic ones. The Weavers of Nishijin (1961) is Matsumoto’s seminal experimental documentary work; reflections on consumerism, labor, as well as cultural and financial capital come through in images of artisanal kimono fabrics being produced in Kyoto.