Time Is Our Border

The question whether time is a border had been raised by the artist through his solo exhibition KIGOJA Standard Time (KST) in Seoul in 2016. In that year, North Korean regime setup its own timezone, Pyongyang Time, as a gesture to distant from its colonial history. This also results in creating an additional immaterial border between the two Koreas. By setting up an imaginary timezone, KIGOJA Standard Time (KST) UCT +9.75, Wong puts his audience in an active participation which his power over the control of time was exercised as well as being an attempt to manifest the notion that time can be a border. His interest across temporality and geopolitics can also be seen in his work That’s How I Used to Know I Have In Fact Crossed This River (2015) commissioned by Para Site and his solo exhibition The Dashes; The Laughter; The Reservoirs (2016) at Asia Art Center. While Wong embarks to take on text in neon sign with Time Is A River (2017), an outdoor installation set its backdrop by a brook in Ulsan, Korea, as a form to materialize his thoughts on temporality. Time Isn’t Our Border (2017) and its complement, Time Is Our Border (2017), are neon signs made in Wong’s handwritten text, spelling out the words of the titles. Although there is no set relationship between the two works, they speak of Wong’s frustrated dilemma on time as a border, in both conceptual way and his own personal relationship. 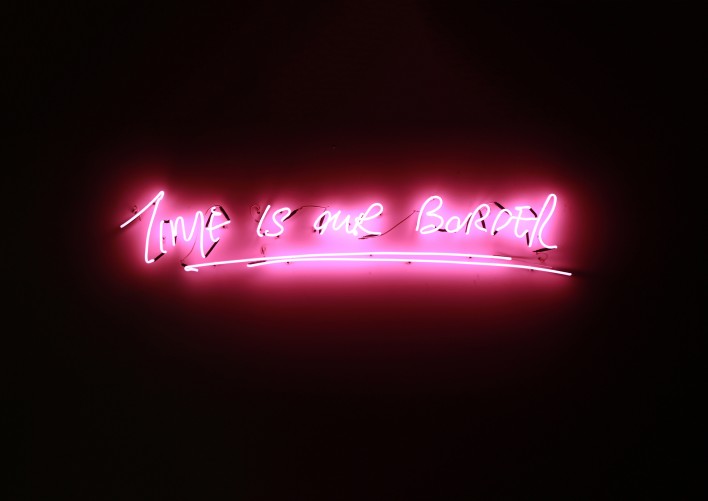