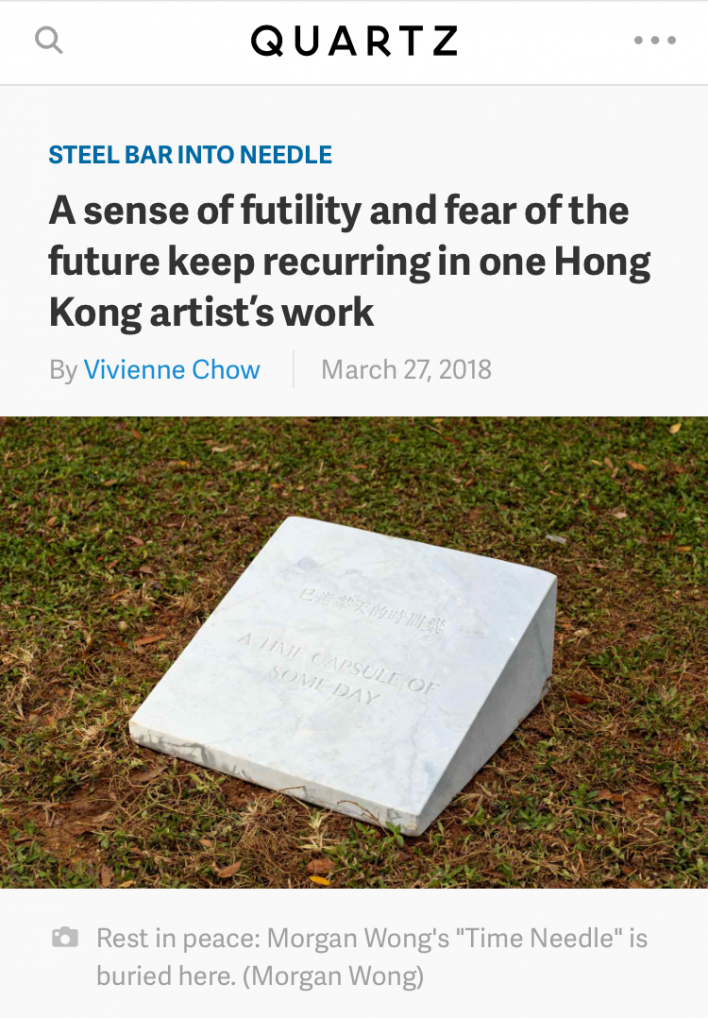 Tucked behind the bushes in an inconspicuous garden by Hong Kong’s harbor front is a white marble plaque resembling a tombstone. On closer inspection, the words “A Time Capsule of Some Day” are engraved on it.

“A time capsule is something very personal. Different people have different ideas of what to put in a time capsule as a reminder of the past,” says Morgan Wong, the Hong Kong artist behind the plaque.

Buried beneath the plaque is Wong’s time capsule, a glass tube filled with steel powder. Inspired by the Chinese idiom “to grind an iron bar down to a small needle,” which means persevering with a difficult task, he continues to grind down a massive steel bar everyday, and collects the powder to put into needle-shaped tubes like the one he buried.

Since 2016, Wong has made more than 200 variations of Time Needle, each containing powder collected from the steel bar. The project, he says, is a symbol of the struggles of Hong Kong people in the face of a multitude of challenges. The months-long Umbrella Movement protests of 2014, in which people occupied the streets calling for greater democracy, is one such struggle that comes to mind.

Time Needle (A Time Capsule of Some Day) is the 34-year-old artist’s latest work, and is being displayed in the Harbour Arts Sculpture Park, an expansive exhibition of 21 public sculptures by a mix of international and Hong Kong artists on show until April 11. Other pieces being exhibited include a signature pumpkin installation by Yayoi Kusama, Antony Gormley‘s DAZE VI (2016), and Tracey Emin’s A Moment Without You (2017), a sculpture of birds perched on thin poles said to be the artist’s tribute to her late friend, Hong Kong tycoon and cultural icon David Tang. Wong’s work is also being displayed at a solo exhibition at this week’s Art Basel art fair in Hong Kong.

Contrary to the blockbuster pieces on show at the sculpture display, Wong’s piece is subtle, and far removed from the main exhibition ground.

Born in Hong Kong in 1984, Wong grew up in Tuen Mun, a satellite town that lies over an hour away from the city centre. For Wong, who was educated at an art school in London, time is an essential concept. He is inspired by the nature of time and the way that the past cannot be recovered, and his works are often produced through intensive, time-consuming manual labor. The time and effort he puts in, however, don’t always result in the most crowd-pleasing art pieces, and they certainly have yet to make Wong a superstar in the art world. In that sense, his art reflects a reality as futile as the one for Hong Kong people waging their long battles for democracy and freedom—it feels just as unattainable as grinding down a steel bar into a fine needle.

That feeling of despondency among Hong Kong people can also be illustrated by one of Wong’s earlier works, a video installation called Demolishing Rumour (2010). Inspired by a rumor of the demolition of Beijing’s arts district Caochangdi, a small screen showing a video of the artist smashing bricks is wrapped inside a structure made of bricks and concrete. No matter how hard Wong tries to break the bricks in the video, he is still trapped.

A more recent 2014 work, The Remnant of My Volition (Force Majeure), exhibited at the Art Basel art fair in Hong Kong just months before the Umbrella Movement protests broke out, appeared to be a response to China’s desire to see Hong Kongers express more patriotism to the mainland. The bed-like installation was made up of white cushions embroidered like calendars, with the first date on them July 1, 1997, the day Hong Kong returned to Chinese rule, and the last one June 30, 2047, when Beijing’s promise that Hong Kong will remain unchanged for 50 years expires. The headboard had been covered by 50,000 Chinese national flag stickers that were peeled off to each reveal the indentation of a white flag—the symbol for surrender—underneath.

Does Wong believe Hong Kong’s future is entirely hopeless? Wong shrugs. He says he wants to use Time Needle as a metaphor for the collective efforts of the people who made Hong Kong great, and that they should be remembered and honored.

“What’s in the time capsule is not something necessarily dead, but it’s definitely something that’s already gone.”

Having said that, Wong carries on grinding down the steel bar.