“Morgan Wong: Filing Down a Steel Bar Until a Needle is Made” at Tintype Gallery 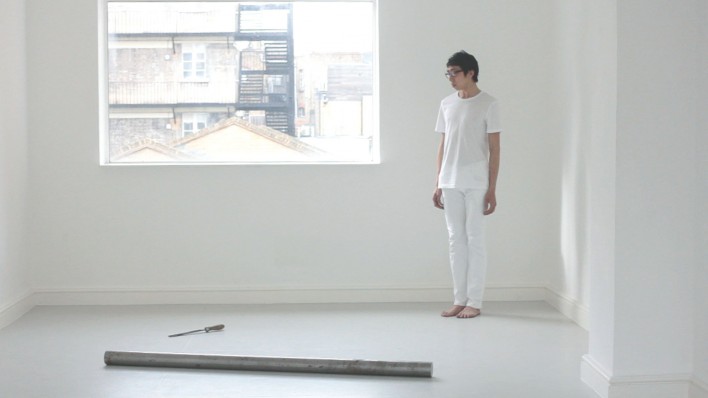 “This is no longer a singular work; it has evolved into a trilogy.”
Morgan Wong

Tintype is pleased to present Filing Down a Steel Bar Until a Needle is Made, a week-long performance by Morgan Wong.

“It all began in 2011 before I came to London. I conceived the idea of filing down a steel bar until a needle is made. The idea is a reference to an ancient Chinese allegory which revolves around will and determination. I had the bar fabricated – it is the same weight and height as myself – and since then it has been in my studio waiting for me to start.

“Where is the Sage is the first episode of what has become a trilogy. Rumours that I would start filing the bar spread amongst my friends. I arranged the pole next to a pile of rocks and dried branches to mimic the scene where the allegory happened (if it ever did). Everything was ready, except me. Some people tried to steer me away from my herculean mission. Others continued to disseminate the myth. But many believed that such a ‘hopeless, impossible task’ would never be carried out.

“Almost two years went by. I’m not interested in an illusory way of achieving the result. It was time to take action.

“Frustration of Having More Than Two Choices in Life is a video work produced after I had spent two days in Tintype’s old space in Clerkenwell at the point when they were about to leave it. For me, it was a period of intensive meditative isolation from the world. I gazed at the metal bar for half a day; I gazed at the hand file for another half day. I spent the second day lying on the floor in order to create a direct visual connection to the bar. I repeated the phrase ‘now or later’ over and over.

“By the end of those two days something had happened. The Third Act is about to begin: Filing Down a Steel Bar Until a Needle is Made will be a durational performance as promised.”

Morgan Wong has performed at Liste Art Fair, and in Beijing Caochangdi Art District and was Sapporo Artist in Residence. His work explores the materialisation of time and often involves a durational activity that also becomes a sculptural or filmic work.