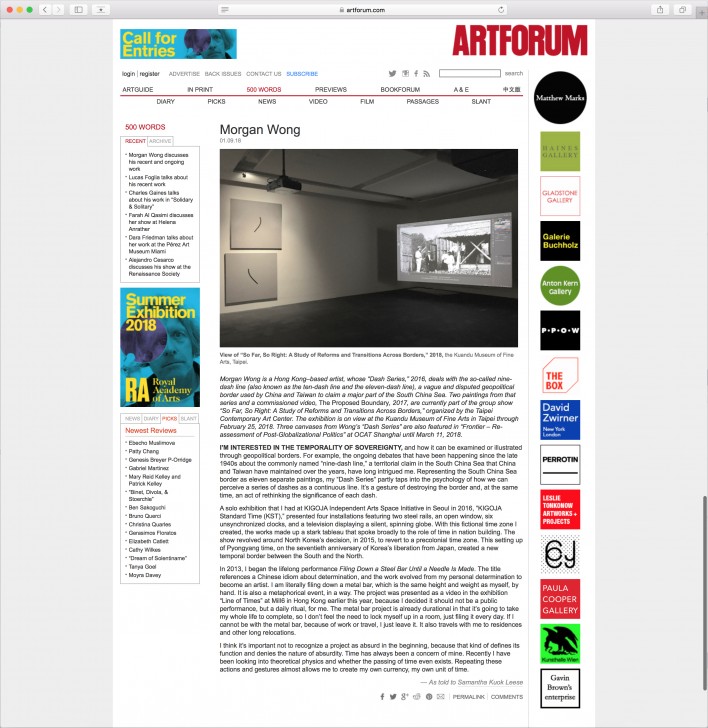 Morgan Wong is a Hong Kong–based artist, whose “Dash Series,” 2016, deals with the so-called nine-dash line (also known as the ten-dash line and the eleven-dash line), a vague and disputed geopolitical border used by China and Taiwan to claim a major part of the South China Sea. Two paintings from that series and a commissioned video, The Proposed Boundary, 2017, are currently part of the group show “So Far, So Right: A Study of Reforms and Transitions Across Borders,” organized by the Taipei Contemporary Art Center. The exhibition is on view at the Kuandu Museum of Fine Arts in Taipei through February 25, 2018. Three canvases from Wong’s “Dash Series” are also featured in “Frontier – Re-assessment of Post-Globalizational Politics” at OCAT Shanghai until March 11, 2018. I’M INTERESTED IN THE TEMPORALITY OF SOVEREIGNTY, and how it can be examined or illustrated through geopolitical borders. For example, the ongoing debates that have been happening since the late 1940s about the commonly named “nine-dash line,” a territorial claim in the South China Sea that China and Taiwan have maintained over the years, have long intrigued me. Representing the South China Sea border as eleven separate paintings, my “Dash Series” partly taps into the psychology of how we can perceive a series of dashes as a continuous line. It’s a gesture of destroying the border and, at the same time, an act of rethinking the significance of each dash.

A solo exhibition that I had at KIGOJA Independent Arts Space Initiative in Seoul in 2016, “KIGOJA Standard Time (KST),” presented four installations featuring two steel rails, an open window, six unsynchronized clocks, and a television displaying a silent, spinning globe. With this fictional time zone I created, the works made up a stark tableau that spoke broadly to the role of time in nation building. The show revolved around North Korea’s decision, in 2015, to revert to a precolonial time zone. This setting up of Pyongyang time, on the seventieth anniversary of Korea’s liberation from Japan, created a new temporal border between the South and the North.

In 2013, I began the lifelong performance Filing Down a Steel Bar Until a Needle Is Made. The title references a Chinese idiom about determination, and the work evolved from my personal determination to become an artist. I am literally filing down a metal bar, which is the same height and weight as myself, by hand. It is also a metaphorical event, in a way. The project was presented as a video in the exhibition “Line of Times” at Mill6 in Hong Kong earlier this year, because I decided it should not be a public performance, but a daily ritual, for me. The metal bar project is already durational in that it’s going to take my whole life to complete, so I don’t feel the need to lock myself up in a room, just filing it every day. If I cannot be with the metal bar, because of work or travel, I just leave it. It also travels with me to residences and other long relocations.

I think it’s important not to recognize a project as absurd in the beginning, because that kind of defines its function and denies the nature of absurdity. Time has always been a concern of mine. Recently I have been looking into theoretical physics and whether the passing of time even exists. Repeating these actions and gestures almost allows me to create my own currency, my own unit of time.

— As told to Samantha Kuok Leese